Warning: Use of undefined constant minor - assumed 'minor' (this will throw an Error in a future version of PHP) in /home/customer/www/psychskills.com/public_html/wp-config.php on line 86
 Stop Panic in Its Tracks! - PsychSkills

Stop Panic in Its Tracks! 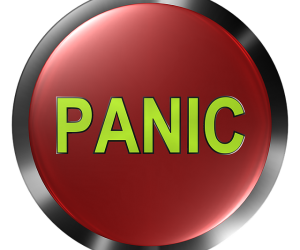 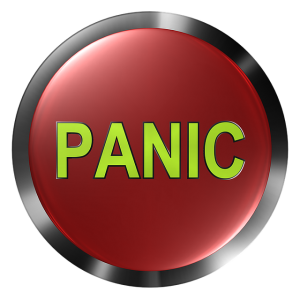 Those of you who suffer from panic attacks know the awful feeling when your throat starts to close up, you get dizzy or lightheaded, maybe feel tightness in your chest and have difficulty breathing. Your vision may be affected and you can become either hot or cold or alternate between both. You may feel nauseous.

You may believe you are going crazy or having a heart attack. The more you are convinced it is one of those the worse the symptoms become. Fear really takes over at that point and makes the whole thing worse as you envision death, surgery, hospitalization, public embarrassment, being hauled away to a psychiatric hospital by police or emergency staff and long lasting health issues.

You may not believe it, but it is possible to stop one of these bad boys right in their tracks. It all takes place in your brain and you can take steps to correct it. You control your brain or your brain will control you. And I know it works because I have done it myself.

After being in a car accident years ago that was caused by someone else, I started experiencing panic attacks in the car whenever it looked like someone was going to pull out in front of me, as that is how the accident was caused. I would go through all the symptoms listed above and usually have to pull the car over and get a grip on myself.

I was in graduate school at the time so not as well versed in cognitive psychology as I am today. It was a learning process but one that has helped me in my own life as well as in helping clients to overcome panic. That is how I know how these steps work.

Know Your Triggers- if you know the sort of things that are going to set you off then you can prepare yourself ahead of time. Often this is enough to tame the initial onslaught of fear before it gets out of hand. You are not bringing one on yourself by thinking about it, to the contrary you are meeting the enemy head on. Ignore those around you who say “just ignore it”. Trying to ignore it is like trying to stop an elephant who is charging toward you.

Your logical self will tell you that it is too much of a coincidence that you would have a heart attack right when you have prepared yourself for a panic attack and been exposed to your triggers. That will minimize the symptoms right from the get go.

Triggers can include driving, being in crowds, flying, or any number of things that can carry a scary meaning. Don’t avoid the scary thing, that gives it too much power. Do the scary thing as much as you can, it will actually finally lose its scariness.

Acknowledge to yourself that you are in some state of high anxiety or panic. Don’t try to push it away or fight with it, that makes it worse also. Just say to yourself, “OK, I am having a panic attack”, or “I am panicking”.

Breathe- Most importantly, this helps stop the lightheadedness. Usually the lightheadedness is caused by the shallow breathing you do when in the midst of an attack. It can also help with the feelings of nausea and temperature control.

Handheld personal biofeedback devices can help with this as well, they teach you to get your breath and body in alignment. Some people who are susceptible to panic carry one with them at all times.

Talk to Yourself- Talk yourself through the attack. Have a conversation about what is happening, why it’s happening, that you are not sick or dying and that it will be over soon. Focus on the science of it rather than the emotionality of it. Science is rational, emotions can be all over the place. There are dysfunctional thought patterns called Catastrophizing and Fortune Telling that come into play here and need to be addressed.

Use humor with yourself. Even dark humor is better than no humor. Learning to laugh at it or lighten it takes away much of it’s power over you.

Distract yourself-If being in a crowd is a trigger for you, do some math in your head or get involved in an activity around you. For example, if you are in a mall or market, focus on a product or the price of something. Read the labels, anything to push aside the major panic and allow you some distraction. If you are in the car, change the radio station or start singing with a song. If you are flying, force yourself to read.

Armed with this knowledge you are now already a few steps ahead of your next panic attack. It takes a few tries but if you do all of these steps you will find yourself mastering the art of stopping a panic attack in its tracks.

Tied to anxiety and panic are usually some dysfunctional thought patterns that promote these troublesome emotional responses. Remember your behaviors and emotions are tied to your thoughts. If you would like some additional assistance in identifying and working with these,  get our free resource-

How to Break Free from 12 Dysfunctional Thought Patterns…and a handy chart to help you track your progress.